Cherry plum (Prunus cerasifera) is described by Andrew Lear (a.k.a. Appletreeman) as ‘Scotland’s most undervalued fruit’ and I completely agree. It is just a little too big to have in my allotment, but I would definitely have one in a larger forest garden. Fortunately, in Aberdeen I don’t have to grow it myself as they are all over the place in my neighbourhood. It’s one of the first plums to flower, so it’s often planted as an ornamental, and it makes a good hedge (although don’t expect any fruit from it growing it this way), and abandoned hedges sometimes grow into dense rows of fruiting trees. Whatever the reason, there are long lines of cherry plums in my local park and behind the nearby botanic gardens. 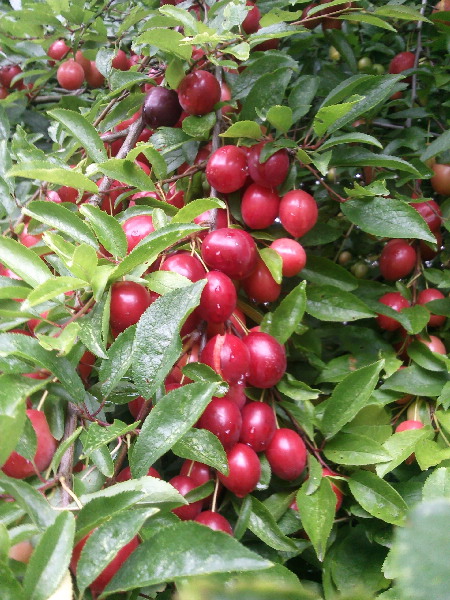 Cherry plum fruit is very variable. With some you can clearly see the reason for the common name as they are no larger than cherries, others are more plum-sized. The colour ranges from yellow to a speckled red through to a dark, plummy purple. Taste and texture vary too, but in general they are nice, but not strongly flavoured for plums. They are generally poor keepers and have a habit of falling off the tree the second they are ripe (although again, this varies). This means that they are not the best eaters, although they are juicy and somewhat moreish when munched directly off the tree.

Where they really come into their own is when they are cooked. This seems to enrich the flavour and they make lovely jam. I usually make dozens of jars every year and it is easily my favourite jam. They often fruit very heavily, so it doesn’t take long to gather bucketloads. I’m sure you don’t need me to tell you how to make jam, so I’ll just pass on a couple of tips. Ripe cherry plums are soft and fleshy, so it’s easy to get the stones out of them before you cook up the jam. Either use a cherry-pitter or just use a sharp knife cutting down on top of the stone and forcing it out. This saves all that mucking about skimming stones off the top of the boiling jam. The other tip is not to add water to the recipe. Just put the sugar (I use about half the weight of the fruit) on top of the fruit (cut in half) in a bowl and leave it overnight: the sugar draws the water out of the plums and in the morning they will be floating in their own juice.

The cherry plums in our park have become very popular and these days I have to fight for a share. Here’s a recipe for cherry plum chutney from the park’s Facebook page.

Chuck everything in a big pan. Let it simmer for 40 mins until thick and jammy. Remove the plum stones as they rise to the top of the mixture. Spoon into hot jars and seal with lids. Makes approx. 5x 450g jars of delicious tasty chutney!

There seems to be a lot of confusion between cherry plums and another kind of plum called the mirabelle. This isn’t helped by the similarity of the alternative name for the cherry plum – myrobalan plum – to mirabelle. It is hard to be sure whether the similarity reflects the two words coming from a common source, representing long-standing confusion, or whether they just happen to be similar-sounding names from different sources (etymologies are given for myrobalan from Ancient Greek μυροβάλανος (murobálanos), meaning something like ‘juicy date’, and for mirabelle from Latin ‘mirabilis’). The two kinds do indeed look very similar, but the true mirabelle, Prunus domestica ssp. syriaca, is a much more southerly plant, flourishing mostly in the south of England on this island. Unfortunately the confusion spreads into the nursery trade, so it can be difficult to be sure whether what you are being offered is a cherry plum or a mirabelle. There are a few named varieties of cherry plum, such as ‘Gypsy’, ‘Countess’ and ‘Golden Sphere’. ‘Countess’ is a freestone variety, meaning that the seed is not stuck to the flesh of the fruit but separates easily.

Cherry plums grow easily from seed and I have been planting seedlings around the housing estate where I live to provide for the next generation of foragers. If you grow seed from a tree that you like, you have a good chance of getting a good tree, although unfortunately there is also a good chance of getting a cross with an ornamental variety such as ‘Atropurpurea’, which rarely make good fruit. They also seem to cross readily with my Japanese plum (P. salicina) tree, which has the same chromosome number (2n=16). Alternatively, if you have found a tree with good qualities, you can produce an exact clone by grafting cuttings. Cherry plum seedlings are widely available as hedging plants and could be used as rootstock, or you can use a standard plum rootstock like St Julien. Plums can also be cloned by detaching suckers (shoots thrown up from the roots), but in my experience cherry plums are less keen to produce these than other plums.

Finally, it used to be thought that domestic plums (P. domestica) were a cross between cherry plums and the blackthorn or sloe (P. spinosa), but apparently there is now evidence that P. cerasifera is the sole ancestor of all our domestic plums.