One of my favourite seasonal treats from the forest garden is the hostas. No, no spelling mistake: hostas are really edible. In fact, they are a near perfect forest garden crop. Woodland is the natural habitat of many hosta species, so they like moist soil with plenty of organic matter and tolerate a considerable amount of shade. A friend tells me that they have a positive allelopathic relationship (i.e. they secrete chemicals that help each other) with apples, and since the research on it is published in Russian I’ll have to take her word for it. Hostas are no novelty nibble: they have the potential to be a major productive vegetable. 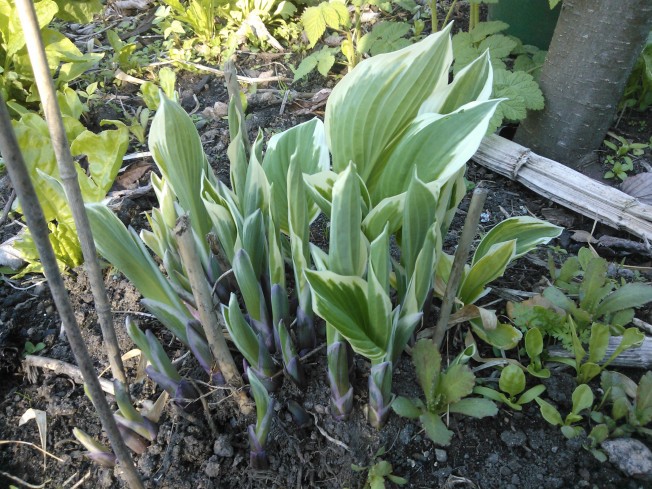 The best part of the hosta is the ‘hoston’, the rolled up leaf as it emerges in the spring, although many varieties are still pretty good even once they have unfurled. The best way of cooking them depends on the size of the hostons. Small ones are delicious if you fry them for a few minutes, then add a little light soy sauce and sesame oil. The slight bitterness of the hostons complements the saltiness of the soy sauce very well. Similarly, they go very well in stir fries. The chunkier hostons are better boiled briefly and used as a vegetable. In the picture below, the hostons on the right are bound for frying, those on the left are for boiling. 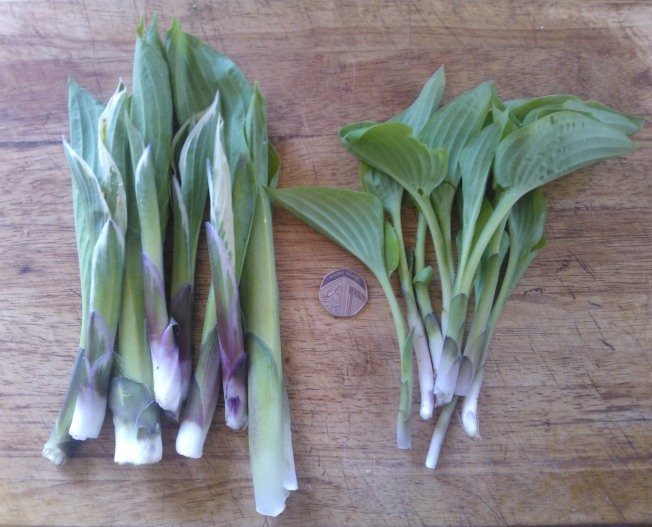 Hostons are best cropped by gripping them firmly near the base and snapping ones off the edge of the clump. If you can snap them off right at the base they will hold together as a whole instead of falling apart into individual leaves. The short leaf scales around the base are bitterer than the larger leaves so they are worth removing. It is much easier to harvest the hostons if the crown of the plant is a little above ground level when it is planted. It is possible to harvest the whole first flush of leaves of an established plant without killing it: ornamental hosta growers will sometimes ‘mow’ their plants to get a second flush of fresh, attractive leaves.

Later on, the open leaves can be used as a general pot herb or substituted for spinach in recipes like ‘hostakopita’. The flowers and flower buds are also edible: the Montreal Botanical Garden lists all species as edible and Hosta fortunei as the tastiest.

It seems to be an open question whether every single species of hosta is edible and therefore whether it is a good idea to try any unidentified hosta that you may happen across. The species I have eaten regularly myself are H. sieboldiana, montana and longipes. Martin Crawford lists H. crispula, longipes, montana, plantaginea, sieboldii, sieboldiana, undulata and ventricosa. Plants for a Future add H. clausa, clavata, longissima, nigrescens, rectifolia and tardiva and list no known hazards for the genus as a whole. This covers all the common ornamental species except H minor, which probably isn’t worth it anyway, and H fortunei, which must be edible since the most popular variety of it, ‘Sagae’ originally arose in hostas being grown for food in Sagae City in Japan. On the basis of that I’m happy to try any hosta myself, but if you’re going to do that, remember to try only a small piece first and test for a skin reaction by rubbing a piece on your skin before putting anything in your mouth.

Picture by ‘dcarch’ on the Seed Savers’ Forum

For more on eating hostas, there is a discussion and some astonishingly beautiful pictures of hosta dishes on the Seed Savers’ Forum. There was also a very useful article in Permaculture Magazine No. 58. It isn’t online unfortunately, but you can buy the back issue if you are really keen. A fellow wordpress blogger has also been writing about eating hostas here.

In Japan, hostas are prized as sansai or ‘mountain vegetables’, a class of plants that are usually gathered wild from the mountain and are considered to be particularly strong in vitality. There’s a great blog post about sansai at http://shizuokagourmet.com/sansai/.