Sushi fans will appreciate this forest garden plant: Wasabia japonica or plain wasabi. Wasabi grows best in shallow running water in dappled shade – fairly demanding conditions that don’t occur in a lot of gardens – but I’ve found that it does okay in the light, sandy soils of my allotment so long as it has some shade and is watered in particularly dry weather.

Wasabi takes a few years to come into full production. It is the taproot that is used: finely grated and then pounded into a green paste it gives that kick that I must confess to being a little addicted to. The leaves are also edible, with a much milder wasabi flavour than the root, so they can be used in dishes where you want a finer control over the heat. However, wasabi is only the most recently fashionable of a whole group of plants, all members of the cabbage family, that have a similar flavour and uses.

The king of these is undoubtedly horseradish (Armoracia rusticana). In fact, if you buy wasabi powder in the West – and even sometimes in Japan – take a look at the ingredients list: you will most likely find that it is made from horseradish powder and green dye. This popularity is not because it tastes better than wasabi but due to the fact that it is an extremely easily grown and productive plant. It is perhaps best not to give it its favourite conditions – a damp soil in full sun – as it is then said to be invasive. My plant is in light shade in a deep, free-draining soil and seems both perfectly happy and well-behaved. Horseradish roots can be harvested any time when the plant is dormant by digging up the plant and taking off some roots, which will then store for a few months if kept cool and moist. You don’t have to be too careful as it regrows easily from pieces of roots, which is also the way it is usually propagated. 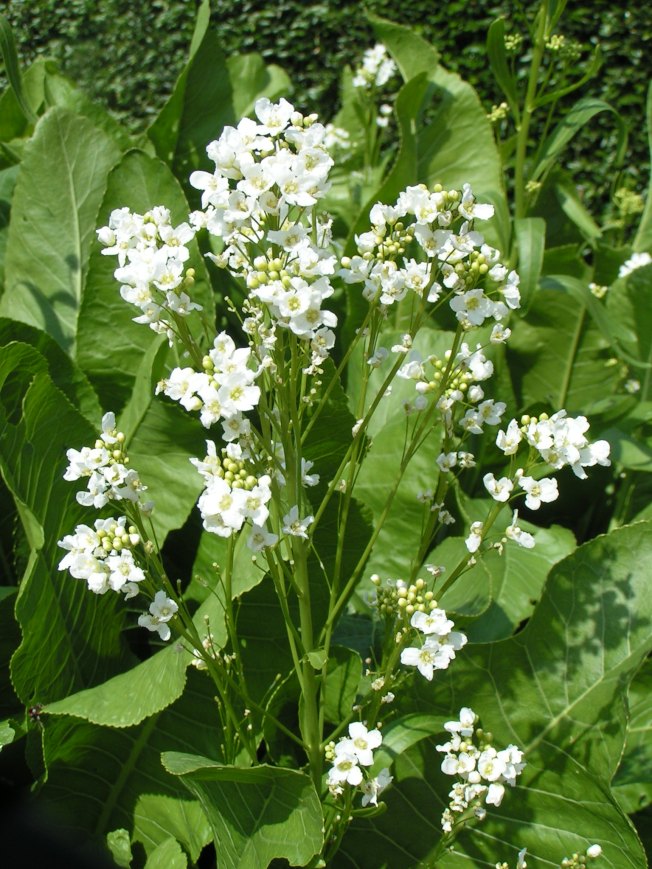 Ungrated horseradish roots have very little flavour, but once they are cut the damaged plant cells break down a substance called sinigrin into fiery mustard oil, a protective ploy against being eaten by less perverse species than ourselves. This volatile oil is easily lost, being broken down by exposure to air or by heating, so horseradish is generally added to dishes at the end of cooking and needs to be used quickly. Grated horseradish’s shelf life can extended by combining it with vinegar: horseradish sauce is made with both vinegar and cream. Even then, however, it only lasts a few months before losing its savour, making it worthwhile to have your own plant. I also find that freshly grated horseradish has a sweetness and freshness that a sauce just can’t match. 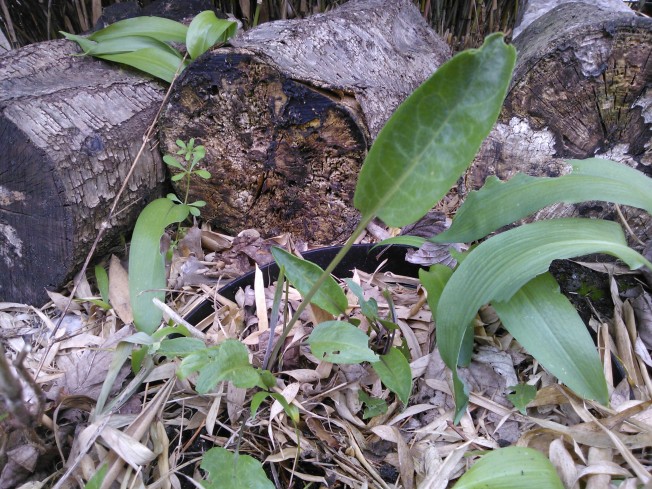 Before horseradish was introduced to the British Isles, two other, native, plants were used for a similar flavour: garlic mustard (Alliaria petiolata) and dittander (Lepidium latifolium). Both have a superior flavour to my mind, but the roots are much smaller and more fiddly to prepare and I wouldn’t recommend growing them for this purpose. Both have edible leaves though, and those of dittander are especially interesting. Alone amongst the other plants, they have a strong horseradish flavour in their leaves as well as their roots, giving them the nickname ‘wasabi leaf’ in my garden. This gives an extremely easy way of adding wasabi flavour to everything from salads to cooked dishes (finely chopped – they are strong!). Perhaps they could be used to make sushi with integral wasabi flavour. If you have too many dittander leaves they can also be used as a pot herb as they lose all their kick when cooked for a few minutes. Dittander can tolerate deep shade and is an invasive spreader if allowed to be, so grow it in a pot sunk into the ground like mint. 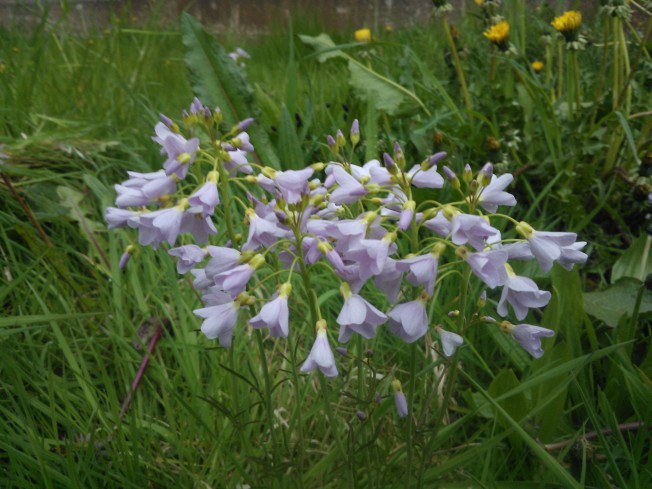 The heat of horseradish can be used in two ways: by matching it with other strong flavours or by using it to spice up blander foods, especially starchy roots and oily, creamy dishes. Classically it is used with strong-tasting meat or fish but there is much, much more to horseradish than this. Scrambled eggs with horseradish root grated into them are superb, or you can try adding it to a creamy pasta sauce at the end of cooking. Mashed potato is another dish that is enhanced considerably by horseradish flavour – if you substitute wasabi leaves for cabbage you can make an amazing variation on colcannon or bubble and squeak. Adding horseradish to soups – again at the end of cooking – gives quite fine control so you can add a very delicate horseradish flavour if you like or go for the burn. For real addicts like me, you can even make a horseradish salad dressing with fresh grated horseradish combined with olive oil, lemon and salt.

Horseradish is sometimes combined with mustard – a similar flavour but more aromatic and complex – to make Tewkesbury mustard, as in this horseradish and root vegetable bake by Nigel Slater. The same combination is used in horseradish butter –  butter, grated horseradish and mustard blended together – which can then be used on dishes like sweetcorn. More horseradish recipes (including Bloody Mary with horseradish and horseradish-infused vodka!) can be found at http://localfoods.about.com/od/horseradish/tp/abouthorseradish.htm.

Finally, Turkish rocket (Bunias orientalis) root has also been recommended as a horseradish substitute. It has a pleasant, spicy flavour but seems to lack the characteristic kick in the sinuses of horseradish.

6 thoughts on “Wasabi, horseradish and friends”