The Egyptians appreciated their sedges. One of them is papyrus, from which they made the world’s first paper. Another is chufa (Cyperus esculentus), also known as yellow nutsedge, the best of the very small number of edible sedges. Dried chufa tubers, or tigernuts as the marketing people would have us call them, have been found in pre-dynastic Egyptian tombs from around 6,000 years ago. It is surprising that the rest of the world has taken so long to appreciate their qualities.

This year I decided to see how they would cope with growing in Scotland. C. esculentus comes in a number of subspecies, some of which are adapted growing in the tropics and some of which range as far north as Alaska, where they are considered a serious invasive weed. The variety that I got was a southern one, which probably meant that the yield wasn’t as high as it could have been but did eliminate any potential weed problems as the plants are completely killed by our winters and rely on human help to overwinter the tubers.

Chufa tubers have a notoriously poor germination rate – probably a deliberate strategy by the plant to hedge its bets by spreading sprouting times – but I managed to get a good proportion started by soaking them, then giving them bottom heat in a propagator early in the year. These were then grown on the window sill until the soil warmed enough to plant them out. I grew them in pots to guard against the invasive root systems that growing guides are full of dark warnings against, but in the event I found that they produced compact root systems with the tubers all held close to the base of the plant. They stood up to a few mild frosts but with the first hard frost of November the tops died off and it was time to have a look at my harvest.

My verdict? Chufa tubers are delicious. Raw, they have both the texture and the taste of coconut. They cook very quickly, which gives them a slightly more floury texture and a very pleasant taste inside, but more surprisingly they keep their crunch no matter how long you cook them for, which makes them a great textural addition to winter stews. Chufa tubers are also used to make a drink called horchata de chufa, for which they are grown in some quantity in Spain. The Spanish generally add sugar and spices, but to my taste it is at its refreshing best if you make it simply by blending some tubers in water and straining to take out the bits.

Chufa tubers are very nutritious, with twice the starch content of potatoes and plenty of vitamins and minerals. They also store very easily: once dried they keep indefinitely. The only remaining question is productiveness. My yields were low, but I gave them more space than they needed (50cm apart) so things could be improved by planting them closer together. Even if they turned out not to be very productive I would still grow some as I am very taken with the flavour and texture. My only problem is whether I am going to be able to hold off from nibbling on them long enough to have a supply to plant next year. 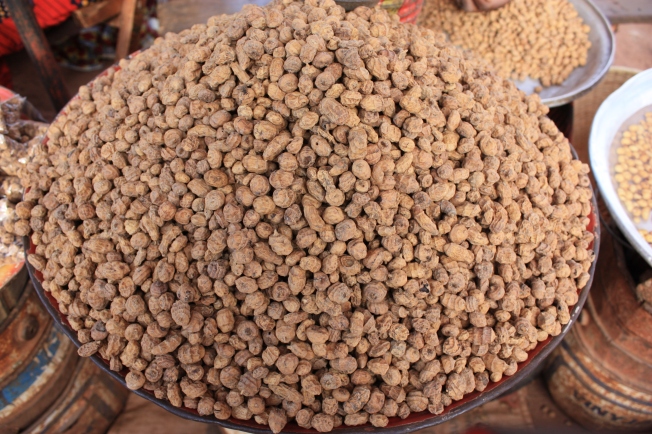 Chufa on sale in Burkina Faso. I didn’t get this many.